Showing posts from July, 2009
Show all

July 28, 2009
The campfire is always the place where people remember their summer vacations best. Diabetes Camp is no different. The leader tells a story that warms the hearts and minds and makes people savor the moment. The wood cackles in the fireplace and it’s dark beneath a thousand pine and oak trees on this hill near Redlands, in Southern California in the early part of the summer of 2008. The flames danced and so did the staff, as well as the audience. And did we ever laugh and smile and have a few tears as well this weekend. We are among 150 people at Camp Conrad Chinnock, a camp specifically created for kids with Type I diabetes. I have two children with Type I diabetes, and we are here to bond with other families who have Type I as well as to learn the latest in diabetes research. But mostly, we’re here to have the kids feel “normal” when they do strange things like test their blood sugars up to ten times a day and give themselves insulin injections via pumps or shots. Tonite
Post a Comment
Read more

July 28, 2009
Here are some travel tips for the Grand Canyon, AZ, for those who want to see the majestic glory of the United States from the rim of the widest canyon around. The buses are the way to get around. The traffic can be frustrating and the buses are free and you won't have to wait more than 15 minutes for one to arrive. There are a lot of visitors from foreign countries, so the drivers are very good at answering questions and making announcements. Take your time and watch your step. Most of the spills, etc. we saw were from people who were not paying attention. There are a lot of rocks to trip on; be careful. Sunscreen and hats are called for. My baseball cap was not providing enough protection from the sun and now I have a wide brim hat that covers my face and neck. We did avoid getting burned with waterproof/sweat proof SPF 30 and finding shade whenever we could. We did not go below the rim on foot or mule. People who do are advised to do so as early in the day as possible
Post a Comment
Read more

July 28, 2009
We’re on Hwy 15 heading home after a week in the Eastern Sierras, including Reno, Carson City, Virginia City, and Sparks. The temp is 96 degrees and our temperatures inside the air conditioned minivan are heated at times, and relaxed at others. We made two stops since leaving Sparks at 6:30am today, in Bishop, we stopped for sandwiches at the famous Sheepherder’s restaurant and then we stopped in Ridgecrest for gas. The highlights of the trip were of course seeing our relatives and enjoying each other’s company, a birthday party of 34 people from 10 regions of the US. The tourist activities were in Virginia City, where we visited the old schoolhouse, and walked the sidewalks where authentic saloons and antique stores abound. We took a tour on a railroad that gave color to the many mining stories of yesteryear, and the tour guide described what life was like in the 1850’s through 1890’s, when this was one of the largest silver mines in the world. The Comstock Lode was the biggest fi
Post a Comment
Read more 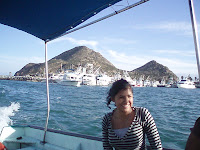 Cabo San Lucas writing Day 1 Departing from San Diego, CA to the downtown ship for boarding to Cabo San Lucas was smooth. The seas that evening were not. We had our group of eight people loaded with gear for the five nights and six days at sea. We were on our way by noon, arriving at the harbor by 12:20pm. We were checked in and on the ship by 1:15pm. Two in wheelchairs (the grandparents) made the trip a bit faster than normal, because they needed to deliver and get the wheelchairs back for more cruisers. Four children, ages 6-12 and their parents in early 50’s along with two grandparents were heading for the high seas with high hopes. The food was a plenty and the comforts were high for the start of this journey. A practice drill for 3000 plus 900 crew went smoothly; prepared for the dangers at sea we don’t anticipate this week. As we pulled away from the comfort of the B Street Pier and the Port of San Diego, the clouds were st
Post a Comment
Read more

July 28, 2009
If you fly a lot, you may think you've got the best airfares. Did you ever want to compare prices with the other passengers on the flight? Airfare wars are already gearing up for the busy fall travel specials. Seems that when school begins, the tourists don't travel as much. October is probably the best month, with the most available seats at the lowest fares. Today, I saw $29 fares on Jet Blue advertised on Kayak. Maybe just a "promotional" fare, but now is the time to shop. The best days to buy your tickets are Tuesdays and Wednesdays. With gas prices relatively low, people are staying on the ground more. American Airlines (one of my favorite airlines) just increased their baggage fees. Yes, it will cost you an extra hundred dollars to take two bags both ways! Consider that before booking, too. May you have good shopping days ahead, and don't forget Priceline, either. Only you won't know your airline or your flight times until after you book. But the pric
Post a Comment
Read more 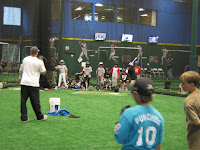 We travelled to beautiful Lancaster, CA and Palmdale, CA for the California Softball All Star Championships mid-July, 2009. Temperatures, as you'd expect, were in the triple digits and 144 teams were sandblasted with dust from 25 mph winds as they played. Elevation here is around 3,000 feet and you're midway between Highway 5 and 15. It's on the way to somewhere. I'd like to visit in the winter and see the change of seasons here. I have been skiing at the local slopes, and that's an intermediate skiers delight. The indoor photo here shows teams practicing at Frozen Ropes/San Diego, where the best trainers and players practice and learn the skills needed to improve. The second photo is of Kiley Robinson, age 12, on North Shore Gold, who was part of the girls fastpitch team who took Third Place at State, and will be playing at the end of July in Salem, Oregon, at Nationals. Kiley and her dad, Adam, a fifth generation San Diegan, practice hitting wiffle
Post a Comment
Read more 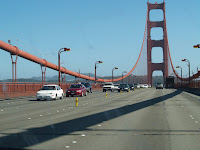 When you drive south into San Francisco on Highway 101, here's what you'll see. How can you not be impressed, when you see hundreds of locals walking, running and biking on the bridge? They call it Golden, but these photos prove it's red. San Francisco has been voted, "most romantic city" and "most popular travel destination" numerous times. Architecture and style, history and technology drive the many diverse social and cultural patterns that are seen in this thriving metropolis. Home to the 49ers, Giants, and hundreds of local wineries, SF entertains and celebrates everything green, and is environmentally conservative. Do plan ahead if you want to get on Alcatraz Island. We were told reservations were running two weeks ahead of time last summer. Like any big city, SF has their share of crime, traffic and inclement weather, plus crime. However, the parks are beautiful, shopping is tremendous, and people watching is unmatched. Alcatraz Island
Post a Comment
Read more
More posts